Preamble: This short essay promotes Buddhist values such as:

There used to be a time when it was possible to have friends without becoming unpaid corporate shills. Who has friends anymore these days, without being silently conscripted into a vast army of guerrilla marketers? Who can hope to connect to any sort of network of other humans to speak of, any longer, without condoning - and thereby still participating in - the shilling of whatever gets advertised behind our backs on the Social Media platforms of today, which have by-and-large supplanted virtually all natural and normal human interaction?

Perhaps, as one posts on Social Media platforms, one might not be actually holding up products that one actually doesn’t believe in, and giving emphatic spiels about their inauthentic “goodness”. Or perhaps one’s videos on Social Media do not include unabashed paid promotions, which we might term “direct shilling”. But that doesn’t mean one isn’t shilling products, in the sense that targeted ads appear before (AKA “pre-shilling”), let alone beside one’s content (AKA “side-shilling”), as the price of using the platform, free-of-cost.

Here’s a close cousin to “side-shilling”, namely that of “just-underneath-shilling” (and note how there is no “X” to close the Ad):

Believe it or not, there is an even worse type of shilling, much more insidious than said direct shilling, pre-shilling, side-shilling, and post-shilling. I call this “the-medium-is-the-message shilling”.

For example, every time you hear someone utter the phrase “Please like and subscribe!” in a Youtube video, that is a perfect example of “the-medium-is-the-message shilling”. The “medium” in this example is Youtube. The service, the medium being shilled in that moment is the Youtube platform itself (as the person self-promotes and encourages their own popularity within that medium, that platform). Youtube has ever-so-cleverly got everyone shilling their platform for free, piggy-backing each and every time that phrase is uttered.

The “Liking” and “Subscribing” sounds innocent enough, but (unless you’ve been living under a rock) we all know that clicking those platform-dependent buttons has an unwanted anti-feature: that of feeding the rampant shilling machine all the more. BTW, there is an older, and arguably better method of “Subscribing” which has no spying, advertising-oriented middleman, which is RSS: 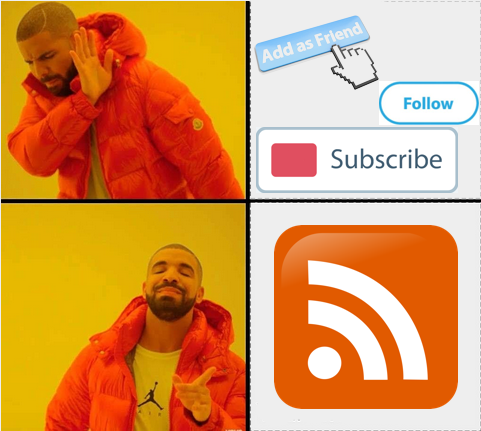 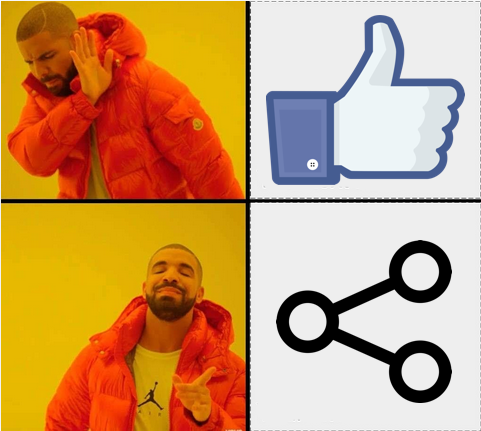 There used to be a concept of “selling your soul”, which was extremely gauche and taboo. Not any more, apparently, just to gain a (very statistically likely to be) tiny voice in a disjointed, fragmented, random, crazy, hodge-podge cesspit - with a few gems sparkling here and there - which is the Internet, when viewed from any angle of Wisdom.

The Open Spirit of the Internet is thwarted at every turn, as people “cheap out” (being unwilling to set up, say, their own blog on their own inexpensive server), by signing up for free accounts on Social Media Platforms which almost universally spurn open syndication protocols like RSS. RSS must be spurned - from the bottom-line-oriented point of view of Social Media - to try to thwart jumping over the walls of the so-called “walled garden”.

In fact, “selling one’s soul” to Social Media might as well be the new religion. Who, under the age of 30 (at least in Western Culture), would dare not to do anything and everything to gain popularity on these Social Media platforms, or suffer from effectively not existing socially? Apparently one is a total loser, if one has less than 100k “followers” these days. It’s as though one can’t sell one’s soul fast enough to the Corporations who own these platforms. They have tremendously more power and advantage in the overt business relationship one strikes with them, as one clicks through their enormous EULA without reading it.

The Internet is hardly even recognizable any longer, as it started out as a relatively “level playing-field” medium, where everyone could have a say (admittedly, who had the privelege of access to sufficient hardware, and network connection), without being overpowered or censored by effectively law-creating (or at least, law-skirting), gargantuan corporations. That didn’t last too long, now that any and all of the QOS (“Quality of Service”) routing rules of the Internet have been tilted heavily towards the big players.

This unlevel playing-field is just one of many shifty, behind-the-scenes tactics, used to aggressively swallow up a very strong majority of the attention and market share on the Internet, into these very-hard-to-escape “walled gardens”. The popularity of these platforms then sort of feeds back on itself, in the form of “network effects”: once “everyone” is in there, who would dare leave (no matter how bad it gets), so as to not feel exiled?

If you lack the motivation to run your own “Indie” website, I’d like to point out that there is no shortage of grassroots, decently-moderated forums (especially Discourse servers) out there, which are run by communities of real people - who don’t require you to become their shill, or violate your privacy (cough, cough, Discord) - in exchange for a free user account. A good example of this would be discourse.suttacentral.net. These forums fall short of the (far-less-moderated) freedom of a self-hosted blog, which allow fancier content types to be posted (such as self-hosted video, using Clappr, which I use). Having said this, forums are much better than nothing (even allowing posting pictures), for those who need to have their voice heard publically, with minimal effort - just an account creation.

If you would prefer to avoid trolls - by not airing your opinions publically, but rather circumscribing the conversation to likeminded peers - then another alternative is to create a “Group” of fellow contacts within a privacy-friendly Instant Messaging app like Signal Private Messenger. This alternative likewise thwarts the shilling machine. Further advantages within Signal Groups would be Push-to-Talk voice memos (my personal favorite), and maybe even good-quality group voice calls, or group video calls (bandwidth permitting).

For those stalwart Buddhist monastics who eschew owning smartphones (or are not permitted to have them, owing to their junior status), I’ve set up my own non-publically-accessible, private chat server, which I call the “Wanderer’s Park”. I especially created this alternative, because Signal Private Messenger, at present pre-supposes that you have an active SIM card to create a user account (and it sends an SMS activation code to guarantee this). Account creation in my chat server requires only an email address to sign up, not a SIM card - however you do need an initial invite link (which is not publically posted).

So in conclusion, by cooling off our egos - which is a very Buddhist thing to do - and eschewing the quicksilver popularity contest on Social Media platforms, we will preserve our peace of mind and sanity, from at least secluding ourselves from all the harmful psychological effects characteristically found on those platforms. Grassroots-run, privacy-friendly alternatives do exist - where we can still talk with much-more-neighbourly friends and peers online - which respect our privacy, and don’t turn us into unwitting corporate shills.

If those alternatives aren’t enough of a platform for you, and you have a larger message to share with the world (than those alternative platforms will allow), then please put your time and money where your mouth is, and rent an inexpensive VPS of your own, buy a domain, and run your own Indie website. You can syndicate through RSS, and thereby cut out any unethical middleman taking advantage of the connection between you and your RSS subscribers. 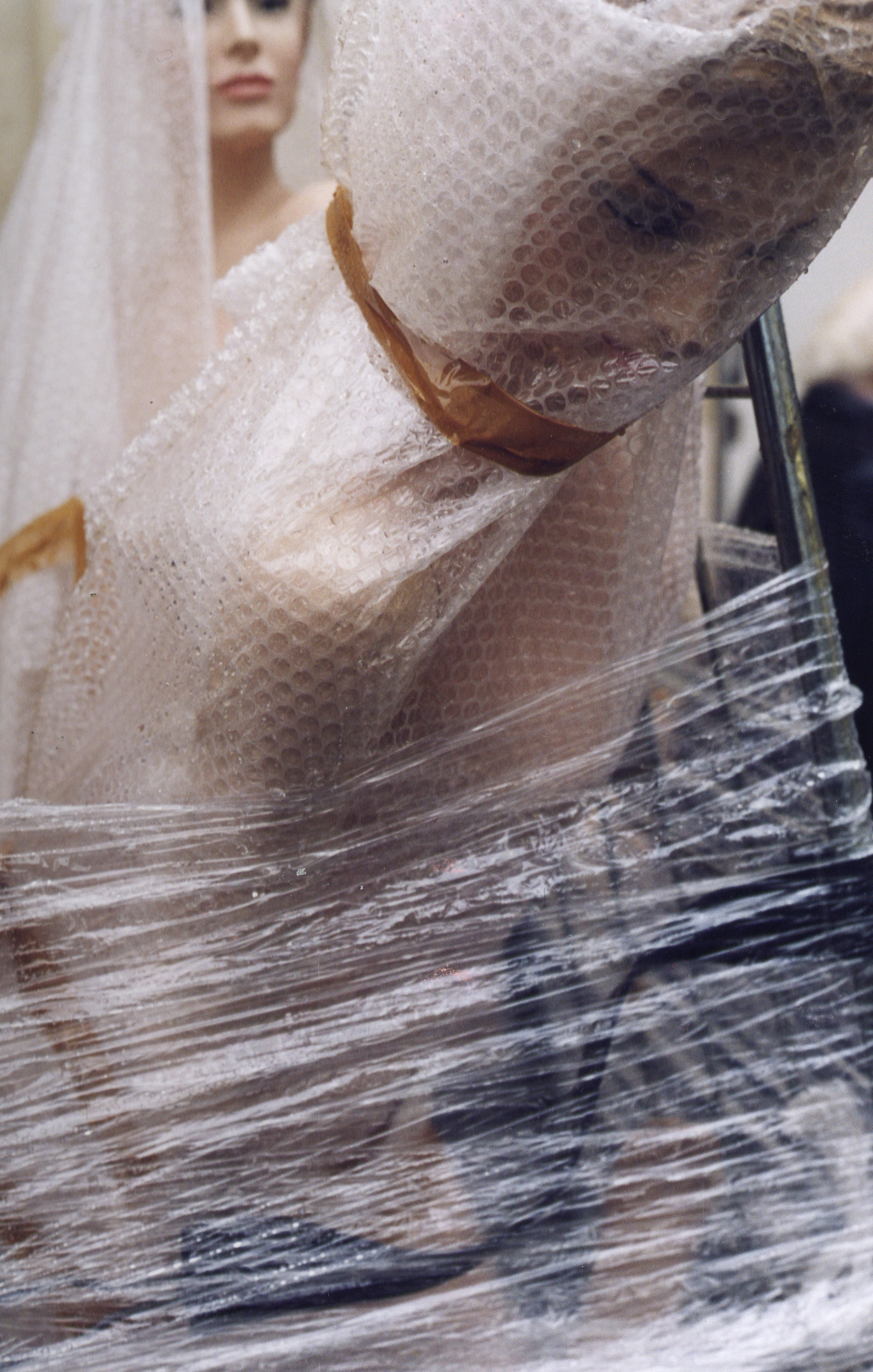