A regularly occurring question that Buddhist monks get from Westerner Buddhists is this: “What is Buddhism doing for the environment”? Since the natural environment of ancient Jambudipa, 2500 years ago, was pristinely pastoral, there was no thought about needing to care about the environment: it was something that was effectively infinitely abundant. It was generally a time of plenty, with settled agriculture, domesticated cattle, and iron still being relatively new-fangled inventions. The state of the art weaponry included swords, spears, and bows and arrows. No petroleum products, internal combustion engines, industrial revolution, or gunpowder (let alone nuclear weapons) existed yet, as a means of warfare, and conquest.

So we shouldn’t be too surprised when the Buddha didn’t go out of his way to include any sort of carefully-defined environmentalism in his doctrine. Alas, there is no 8-fold path of recycling, or 4 noble truths of caring about Mother Earth. Having said this, the very common teaching of “adinna dana” (“not taking what is not given”, in the oft-recited five precepts for laypeople) could be more broadly applied to Mother Earth: we have a deeply moral obligation to “not take what is not given” from Mother Earth - namely too many natural resources, beyond the point of sustainability.

The Buddha did teach, again and again, many various teachings which have a theme of “don’t get too big for your britches”. There are many examples where the Buddha taught lessons about having an attitude of humility, respect, and gratitude, as bulwarks against greed, hubris, and exploitativeness (which would, if left unchecked, eventually lead to the wanton wastage of the planet’s natural resources, which we are generally so much more aware of now). So there are teaching tools all over the place in the Suttas, to address the deeper causes and especially attitudes underlying our environmental crises.

Virtually all Westerners want more than lessons however, more than just talk. They want to see some concrete action. When it comes to Buddhist monks taking some sort of direct and publically visible environmental action in an uncomplicated, inexpensive way, I think the usage of bicycles is a no-brainer. Bicycles are a humble (not to mention, health-promoting) means of transport (as opposed to automobiles and airplanes), and the Buddha always allowed the usage of any means of transportation in the Vinaya, just so long as it was humble. In ancient Jambudipa, if you were rich enough to own an elephant, horse, horse-and-chariot, or horse-and-carriage, these were all status symbols, and symbols of power. It was effectively only the upper-class members of the Brahmin and Warrior castes who could afford these. The Buddha forbade monks to “high-horse” it on any of these vehicles. On the other hand, monks are allowed to be passengers in ox-carts, or even palanquins/sedans (a chair on two long poles, carried aloft by 4 men). Counter-intuitively, a monk riding on a palanquin isn’t “high-horsing” it, according to Vinaya.

This translates into a rather twisted modern day interpretation of Vinaya, where monks are allowed to sit in exhorbitantly-expensive business-class seating on an airplane (rationalized because they are merely passengers, not piloting the aircraft), but they can’t ride a bicycle, because it’s rationalized as “high-horsing” it, since the bicycle is piloted by the monk. The convoluted logic seems to go that a bike is somehow a more arrogant (or even ostentatious) means of transportation, than business-class seating on an airplane, or even riding a palanquin, borne aloft by medieval-style servants. Monks riding bikes would likewise be seen as more arrogant and ostentatious than a monk being chauffeured around in an SUV, with no passengers in the back seat. This algebra of false humility is clearly an inversion of logic, which undoubtedly violates the modern sensibilities of Western Buddhists.

A single, one-time-use business-class plane ticket costs many times more than a sensible bike, which is a durable, far more reusable object. And likewise, any fool can tell you that the environmental impact of driving an SUV around with no passengers in the back is far worse for the environment, than riding a bike. If Buddhism wants to show that it cares about the environment, it should quit its obstinate attitudes towards bikes - pretending they don’t exist somehow for monks - as this is obvious and low-hanging fruit for Buddhist monks to do their part for the environment, and show that they care about the sensibilities of Westerner Buddhists.

The Buddha did an awesome job of knowing and caring about the sensibilities of his various audiences back in ancient Jambudipa, and modern-day monks in the West should likewise know and care about the sensibilities of their respective audiences, to avoid alienating a new generation of potential Buddhists in the West. Come on, fellow Venerable Sirs, you would do well to quit being so medieval, as it doesn’t help public relations for the religion of Buddhism, not to mention your health (as there are relatively few opportunities for cardio-vascular exercise currently available to most Buddhist monks). 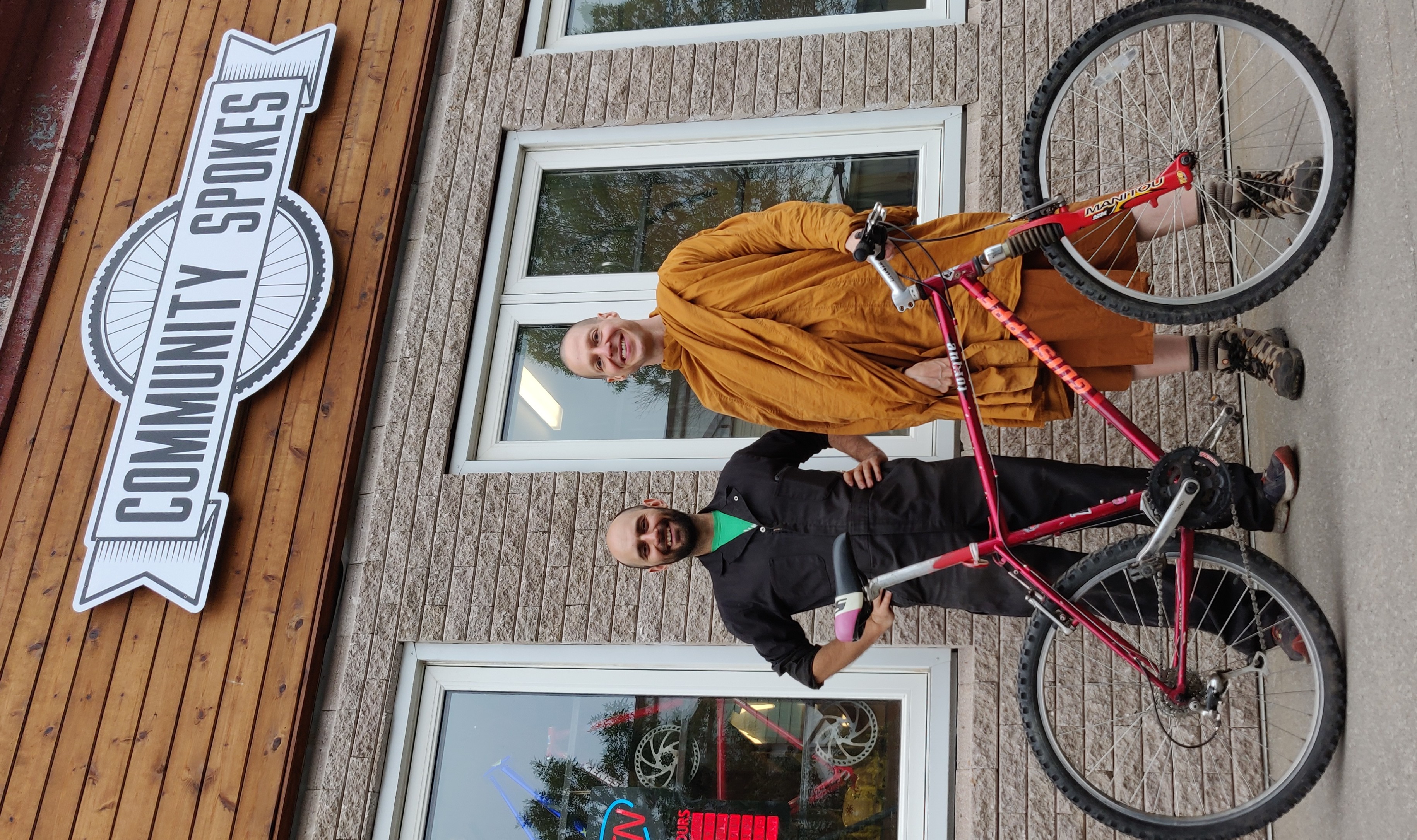 Update: A discussion thread on this is here